I had very different plans for the Wonderful World of Colour blog hop. I was through one project and half way through the other when a new idea struck me. Perhaps some of you can relate.

On Friday night, April 15th, I was watching the Blue Jays baseball game while working on my Wonderful World of Colour project. For those who don't know, April 15th was Jackie Robinson Day: the 75th anniversary of Jackie Robinson breaking the colour barrier in Major League Baseball by becoming the first African-American player in the league. It was also just the previous week that America confirmed Ketanji Brown Jackson as the first Black woman on its Supreme Court. These events got me thinking about a piece that I finished a few weeks ago but hadn't yet had the opportunity to post about.

Last year, I had an opportunity through work to participate in an online course called Confronting Anti-Black Racism. I found it to be a very powerful experience. One of the things we did each week was write a reflection, but I am not really a words person so I had a hard time putting my thoughts into words. So, I also reflected through fabric.

As I sat in my craft room late on a Friday night, throwing around bright and fun and colourful rainbow scraps, and listening to baseball and just having a good time in general, I thought about the Blue Jays home run jacket meant to honour the diversity of the team (it's a great story if you don't know about it), and I thought about Jackie Robinson and the difficulty he went through trying to be a major leaguer, and I thought about the words "Wonderful World of Colour" and I knew what this post needed to be about. We live in a world that is full of so many wonderful people of so many different backgrounds and skin colours. And so, in my Wonderful World of Colour blog hop post, I want to share my reflection piece to celebrate the wonderful world of colour that we live in and all the things that are happening to help make it a better place for the future.

Here is a view of the entire reflection piece. I mostly worked in whites, browns and blacks. But I did add in some pink to represent gender and some green to represent economic status, as those ideas also shape identity and came up as additional themes in the books I was reading. 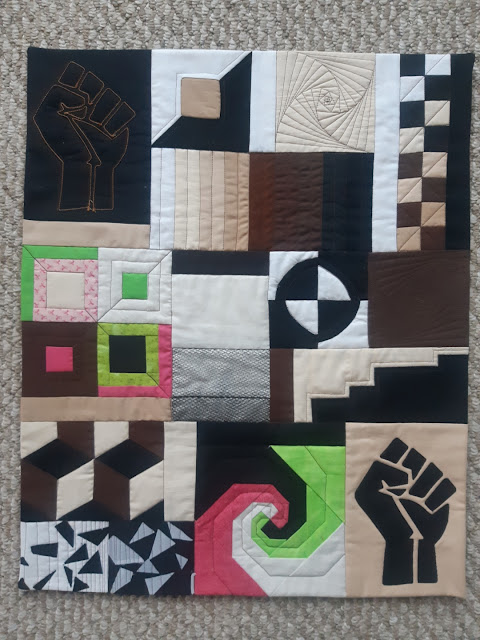 There were a few main themes to the blocks I made that I will discuss below.

These two blocks represent the fact that our society was built on the backs of black people. The first one also shows the (hopefully) historic hierarchy from darkest to lightest skin. 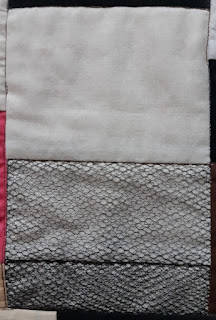 In these first two blocks I wanted to show the spectrum of colours that people come in. 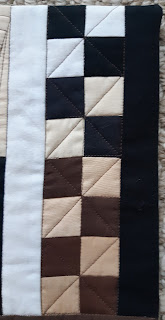 This third block was to represent the concepts of segregation and integration.

The last block in this section was my representation of the idea of trying to fit a square peg into a round hole. When we try to paint certain groups of people with broad brush strokes and fit them into a single identity, we miss the diversity and value that each individual brings. 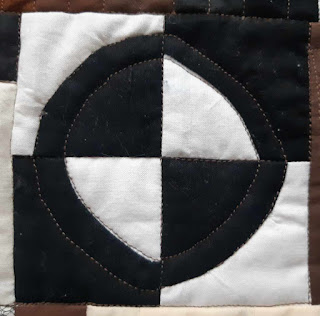 Identity is such a personal thing that is so influenced by outside forces.

This first block is to represent how we frame our identities. Sometimes we see our colour or culture or nationality as the core of who we are with our gender and economic status radiating out from there. Sometimes our gender or economic status is core with our race surrounding that. It's different for every person and it's different for the same person at different stages of life or in different interactions. Our background and our experiences shape how we see ourselves and those around us. 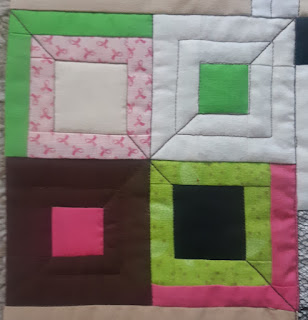 This second block shows that how something is framed or the light that something is viewed in affects how we see it. Surrounded by the white frame, the brown center is dark, but surrounded by the black frame it is white. I think we quilters understand quite well that the fabrics we pair something with affects the colour it appears to be or which pieces of it really get pulled out/highlighted. 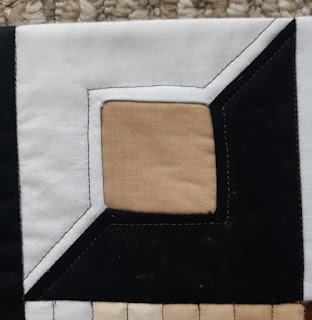 The third block represents the intersection of the different parts of our life: gender, status, colour, background, etc. They all swirl together to make us who we are. They are distinct but joined together. 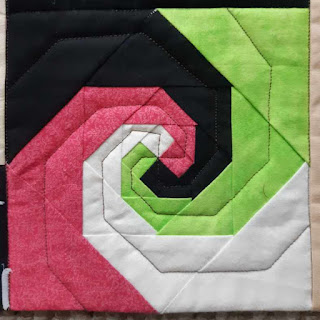 These next two blocks really represent perspective. Although they look to be spirals, they are quilted entirely with straight lines. That's another reason I chose to use the snail's trail pattern in the block above because of the perspective of all of these straight lines coming together to create a swirling effect. Understanding that everyone is coming to the table with different experiences and that people's perceptions affect their understandings and their interpretations was a key idea that stood out to me in my readings. 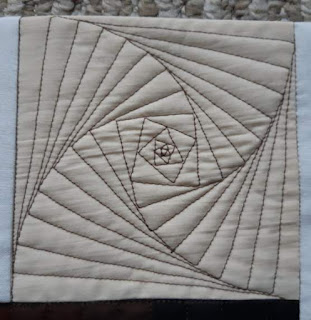 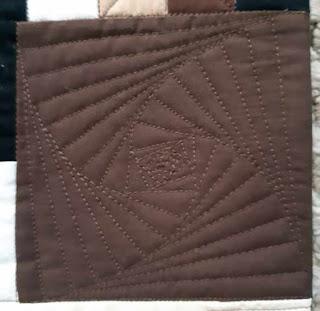 I won't have to explain to the quilter's in the room why I also chose to use the tumbling block pattern. This pattern is all about perspective and completely depends on how you look at it. It is a great reminder that people can look at the same thing and see something completely different, and neither one is wrong. 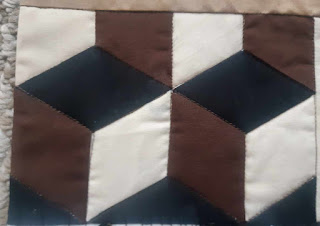 I was doing my reading and reflecting right around the 1 year anniversary of the George Floyd murder. I wanted to include something in my piece to be representative of the hurt and the struggle and the injustices that so many have gone through, but I also wanted to speak to the awareness and the momentum that these events inspired, and so I chose to use the fist symbol. It was used before and it will be used in the future, but in my lifetime and my experiences, this really resonates with the murder of George Floyd and the protests that stemmed from this (and so many years of too many similar events). 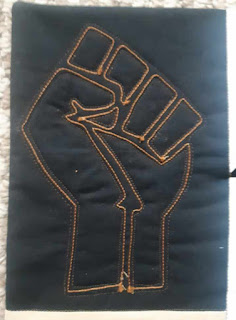 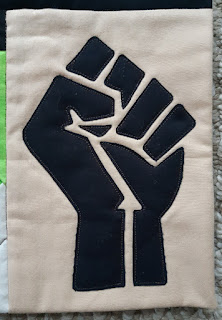 I know this was probably not what you were expecting when you came to my blog today for the Wonderful World of Colour blog hop, but it was on my heart as being entirely appropriate for this blog hop and needing to be posted, and I hope it gave you some food for thought.

I will end with a few more quilty shots and also say that I know that you are encouraged to post comments to encourage the quilters on the hop, and you are welcome to do so, but that was not the point of me posting this piece as part of the hop. I want the focus of this to be about awareness and reflection and not about my sewing abilities or products. I also know that this can be an intricate and complicated and heavy topic (I know I have felt some heaviness writing this post), so please feel free to just sit with your thoughts instead of commenting if that's what makes sense for you. 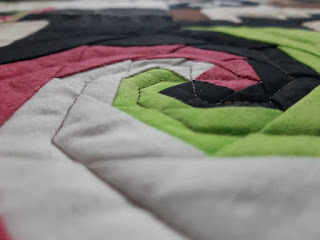 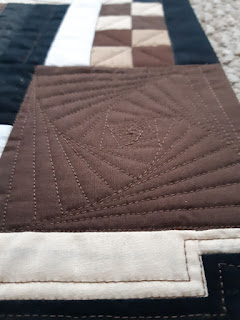 Don't forget to checkout the other quilters and their work:

Crafts and Math (you are here)

Thanks so much for stopping by and going on this journey with me :). And you can check back in at a  later date to see the other projects I had originally planned for this hop.

MrsV
I am a twenty-something newlywed(ish), who is trying to figure out "real" life after 19 years of being in school. I love God, reading, quilting, and math. I also like to scrapbook and make cards. I'm starting to venture into the world of sewing. I'm really good at making messes and not so good at cleaning them up. That's all I can think of for now.

Other Blogs I Read