Well, almost two weeks later, I'm finally getting around to posting about the other quilt challenge we did on our sewing spectacular weekend. Part of that was because I just ended up finishing my final one the other night (it's been a bit of a hectic few weeks).

We started the with the rainbow challenge (Part 1 and Part 2), which we did Thursday night until Saturday at dinner. Then after dinner, we drew for our next challenge. The technique we drew was big stitch quilting and/or sashiko. We couldn't decide whether or not we wanted to add a theme, so we left it open for the night. We each went our own way and started thinking/planning. On Sunday morning we still hadn't decided if we wanted a theme or not - part of the problem being that we didn't know how to pick one or what we might pick- when I said "the sky's the limit" meaning that we could pick anything, but then we decided that that wasn't a half-bad theme, so we decided we would go for it with at least one of our pieces (we were both already considering multiple pieces - this is what happens when you have too much time on your hands).

I knew for my first piece I wanted to do some sort of sashiko, so I started googling because I didn't even know what exactly defined it. I liked the look of some of the sampler pieces I saw, so I thought that would be nice, but it was figuring out how to fit that into a tiny piece. I decided to go with a 6" square that was divided into 9 2" squares. I had to carefully choose designs that struck the balance between a small enough pattern to fit into a 2" square and still be recognizable, and not being so intricate that it would be lost or impossible with bigger stitches.

I started by drawing out some of the designs in 2" squares on some graph paper. Some of them my brain had an easier time drawing out than others. Once my sketches were done, I redrew the designs on my fabric. This whole process took a lot longer than I wanted. My brain had more trouble without the gridlines to help me (and even with them it struggled sometimes).

Then it was time to put the layers together and start stitching. I used the great little frames my grandfather made for me a while ago. They were a little big for the job still, but I made it work :). 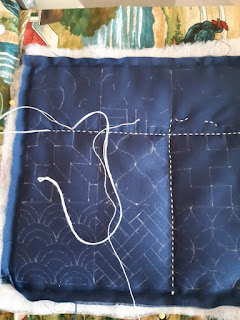 I didn't want to just do a sashiko sampler — I wanted to do something a little more creative than that, so I turned to our theme of "the sky's the limit" for inspiration. I decided that the top row of squares would open up (removing the limit of the box) with the quilting designs floating up into the sky. (In fact the stitching goes from dense to less dense from bottom to top, I didn't do that on purpose, but it's a happy accident.) 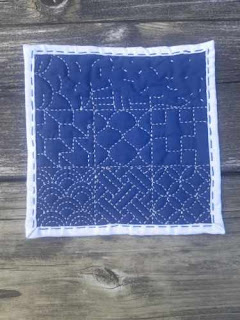 I also did big-stitch binding on this one, so I stitched the binding onto the back, and then pulled it around to the front and stitched it down.

I wasn't sure what my quilting stitches would look like on the back, especially since I was working hard to make them look good on the front, so I chose to go with a bit of a busier back. 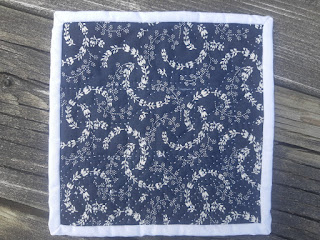 I know my stitches aren't what everyone would could big stitches, but they are big for me, and they are big in the context of a 6" square. So I'm happy with them.

For my second one, I decide to go a more traditional route. Since big stitch quilting is usually done on a full quilt, I chose to do a quilt block as my second option.

I wanted to pick a two-tone/mirror image kind of block where I could do light with dark stitching and dark with light stitching where the stitching would be the same. I've also been drawn recently to inverted star type blocks - especially scrappy ones. I liked the idea of a star, as stars are part of the sky, so I felt like it fit into the them as well - reach for the stars :). The trick was then shrinking the block down small enough to fit the perimeter requirements. This meant I was working with some small pieces: the inner squares and half-square triangles are 0.75" finished. I'm very happy with how the seams lined up given how small everything was. I also decided to work in orange, as the earlier rainbow challenge showed me how much orange I have :). 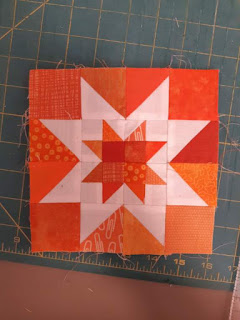 I did a white stitch (2 strands) in the inner orange start and the outer orange sections. I tried hard to make bigger stitches on this one :). The inner star was very stiff and too hard to do actual stitching, so I ended up just going up and down one stitch at a time. This meant I was able to carefully line up the stitches. On the other parts, I chose to just let the stitches fall where they may. For the orange stitching I used 6 strands and 4 strands for the teal stitching. 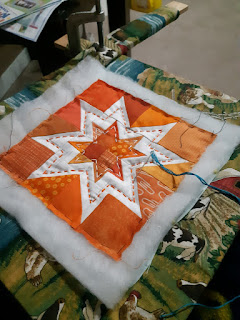 The back has a fun amount of tiny stitches :). 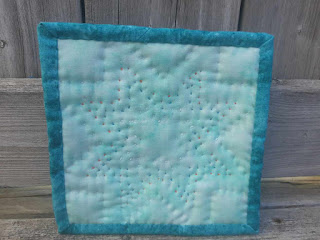 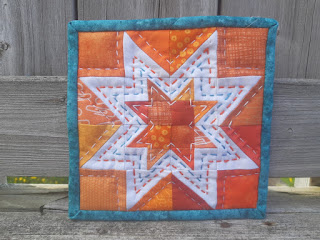 This time my friend was the one that chose to do three challenges. She started with the trickiest one, and chose to do a double-sided piece. She somehow magically pieced it on Sunday morning before she showed up at my house at 11 AM. 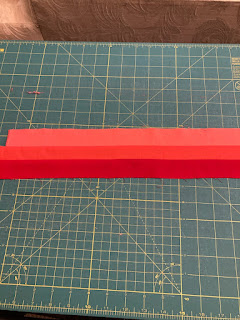 She did a lovely ombre effect, where she inverted the colours between the two sides. She also used an ombre effect with the threads. She had to stitch carefully as she wanted it to look good on both sides. 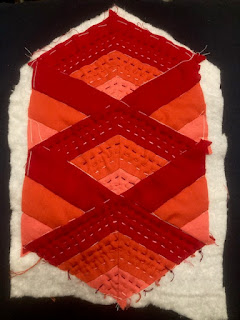 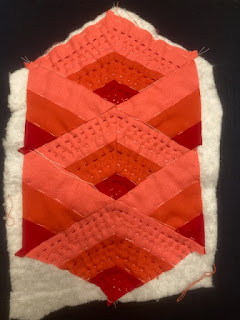 Once she finished the stitching... 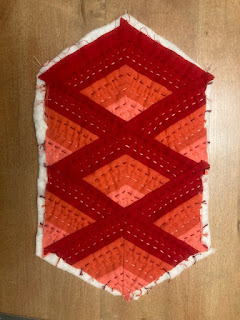 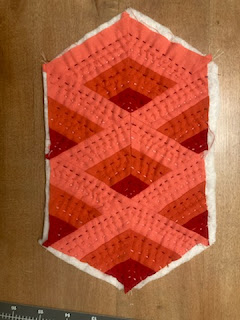 ...she added a white binding and did some more ombre stitching. This time a little more complicated.

She didn't design this one to be part of the "sky's the limit" theme, but I think with those sunset colours, it totally counts. (Left image is the "front") 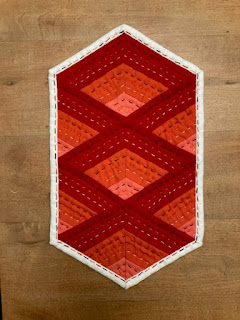 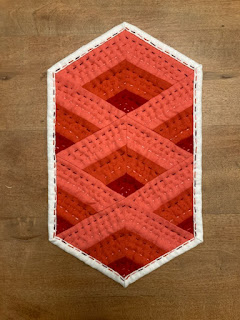 For her second piece, she embraced the theme and did a lovely scene. She hand appliquéd the pieces on to the background (with a little help from a few pins :P). 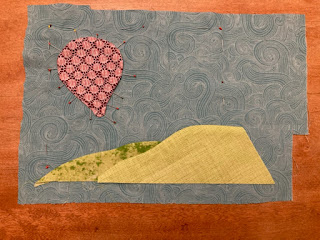 Her background fabric was a fabulous choice. 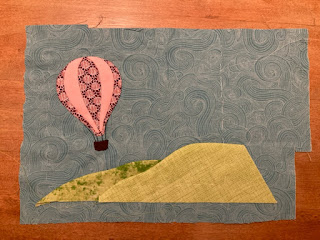 Once she had it together, we had a conversation about finishing techniques. I think we're both a little tired of binding and sometimes want a different look. We decided she could just stitch it right sides together and then turn it inside out. She top stitched it on her machine, and then was able to add her stitching. It came together really nicely, and I need to remember this finishing technique next time I'm tired of binding (as long as the stitching lends itself to this). 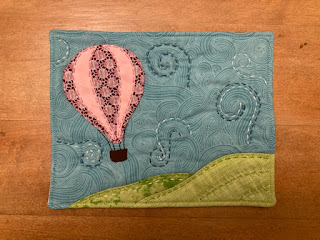 These challenges definitely made her stretch out of her comfort zone in terms of colour contrast (both the rainbow one and the big stitch one). She always picks things that match very nicely, but sometimes that doesn't lend itself to things being differentiated as much as you want. This time she even thought she did a better job of picking colours that differed, but she still had to swap out on of her colours on the double-sided piece. Just goes to show that surrounding colour makes a huge difference as well. And that's why we do these challenges - to learn and grow :).

Her final piece took her back to our first challenge — curves. It's been over a year since we started doing this, and she had to remind herself of the technique :). I'm not sure if I can make this one fit into the "sky's the limit" theme (maybe if she'd let me turn it sideways).

Once it was pieced, she started stitching. 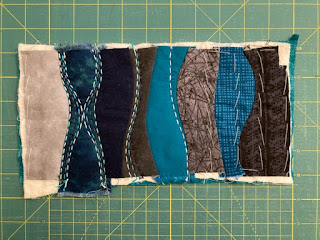 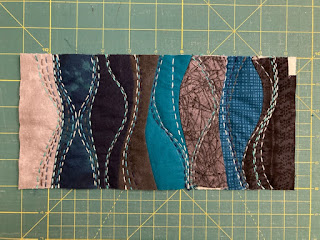 Stitches on the back. 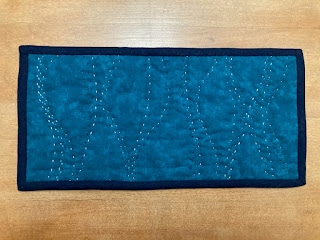 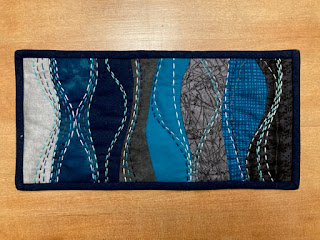 Whew. I'm finally done posting about our Sewing Spectacular. Guess we can have another challenge now :D.

Again I like your work. I like the quilting on your star Rachael and your choice of colours. I like Becky’s wavy quilting and the doubling up on the quilting lines. All in all very good.

Thanks. It took a bit to get used to making big stitches, but we got the hang of it :).

MrsV
I am a twenty-something newlywed(ish), who is trying to figure out "real" life after 19 years of being in school. I love God, reading, quilting, and math. I also like to scrapbook and make cards. I'm starting to venture into the world of sewing. I'm really good at making messes and not so good at cleaning them up. That's all I can think of for now.

Other Blogs I Read